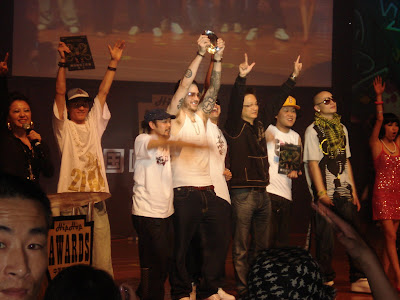 Last month we had the opportunity to attend a very special event, the first ever Hip Hop Awards China held in Shenzhen, Guangdong. We managed to stumble upon the event through a series of zany misadventures, which included a somewhat fortuitous bout of food poisoning and a particularly generous and hospitable skater from Changsha, Hunan. That is the somewhat irrelevant back story. Regardless, we heard about the awards show directly from an interview with a local Shenzhen rapper, JR Fog, who turned out to be involved in organizing the event himself. The day after the interview, JR Fog accompanied us to meet the event’s main organizers, Acome, King and Vincent. We spent the day with them and learned about their goals for the Awards show as well as their personal connection to Hip Hop. Besides JR Fog, who is younger than the rest of them, they had all met in college and in 2001 Acome and Vincent had formed Shenzhen’s first B-boy crew, B.O.F. Later on, Vincent studied abroad in England and switched his focus to DJing. And two years ago King and Come had embarked on an incredible journey to make a documentary film on Chinese Hip Hop, by walking all the way from Shenzhen to Beijing. And by walking, I meant walking.

We met the organizers about a week before the scheduled Awards Show, and we were surprised that this was the first time we had really heard about Awards. In Wuhan, No Fear Family leader Break D had mentioned the awards, and he had told me that they would probably be going. But there was no reference to it on the front page of Hiphop.cn, where some of China’s big Hip Hop events are usually posted. And when we asked some Hip Hop artists that we had met before if they were planning to go it seemed as though many of them didn’t even know that it was happening.

With all of the efforts towards community-building that do wonders for connecting Hip Hop artists throughout China, naturally there are also a number of things that manage to divide the Chinese Hip Hop community. With China being such a huge country, geography might be the most tangible factor in these divisions. Language is closely related to geography. In addition to Mandarin and Cantonese, there are over one hundred other Chinese dialects. Basically each place has its own language; Shanghai has Shanghainese, Kunming has Kunminghua, Fujian has Fujianhua, etc. (Language is a huge issue, and there will be much more to come in later posts!). Another huge division is the somewhat hazy line that has been drawn between “underground” and “commercial” Chinese Hip Hop.

The fact that a lot of artists either didn’t know about the awards or weren’t invited highlights some of these divisions. Many artists who identify themselves with “underground” Chinese Hip Hop, for whatever reason, were neither present nor nominated at the awards. And the majority of the artists who attended the awards were from Guangdong province, as were the audience members. But we must remember that this was the first Chinese Hip Hop Awards. It would be very idealistic to assume that, in its inaugural year, such an event would be able to bring together the entire Chinese Hip Hop Community.

The organizers told us that they hope to continue holding the Hip Hop Awards every year. Their ultimate goal is to have an annual Awards Show celebrating Chinese Hip Hop, and they want each year’s show to get bigger and better. From seeing how much they could accomplish in their first year, I have faith they will do just that. Take a closer look at the Awards Show.