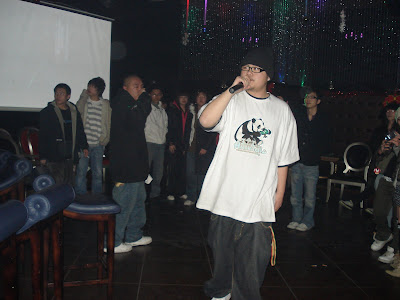 As we travel from city to city (…to city to city) our bag of tapes gets heavier and heavier. Arriving in Kunming we set aside a full week just for watching and transcribing the more than forty hours of interview and performance footage that we have accumulated. While the clips from the following profile on the Beijing-based Longjing come from one of the first shows that we taped in late January, we found that the topics discussed in their interview are still extremely relevant to many of the issues which we continue to explore in our research.

Longjing is made up of three local Beijing MC’s - MC Xiao, MC Ghost, and MC Lil’ Panda – and they are a relatively new group within the Beijing Hip Hop scene. Full of energy and earnest excitement, Longjing explains their personal journey from first hearing Hip Hop music to identifying themselves with the Chinese Hip Hop scene to making their own Hip Hop music. Their stories have a lot in common with many of the other Hip Hop fans and artists that we have met across the country. These common themes include listening to US Hip Hop over the internet, struggling to understand English lyrics, regarding Hip Hop music and culture as a means of individual expression, starting out with imitation of Black American Hip Hop, and eventually, searching for ways to add personal style and culture to the music in order to create Chinese Hip Hop.

Next week we will get another opportunity to see Longjing perform. We will travel back to Beijing for the MIDI Music Festival, an annual four-day music festival held in Chaoyang park with stages set up for different music genres, including Rock, Punk, Folk, and Hip Hop. I’m excited to see how these past four months have treated the boys! But for now, take a look at Longjing this past January.