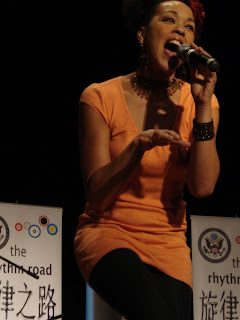 Last Friday we had the opportunity to experience an unbelievable day of live music. American soul singer Maya Azucena and her band conducted a workshop and performed at the Yunnan Arts University in Kunming. They are currently on the Rhythm Road Tour, which is organized by Jazz at Lincoln Center and sponsored by the U.S. State Department, and will travel to four countries in just five short weeks. Kunming was the band’s fourth stop in China alone. Despite the dizzying schedule, both the workshop and the performance were flawless.

The workshop was fun, engaging, and, though the auditorium was full of music students, it was accessible to people from all backgrounds. Each band member showcased their unique talent by demonstrating different genres of music from reggae to blues to drum & bass. Audience participation was the centerpiece of the workshop. Keyboardist Bruce Mack took everyone through a vocal a warm-up, drummer Ivan Katz showed how to play along with a sampler and then the band rocked with a student drummer; they even had the entire audience singing, clapping and stomping out a groove. Maya and the band were elated and the students were thrilled. I couldn’t help overhearing the whispers behind me of, “This is so much fun!” and “The band is so good!” Check out highlights from the workshop.

Following the afternoon workshop Maya and the band returned to the university in the evening to give a full concert. After attending the workshop and listening to their latest album Junkyard Jewel continuously for several days, I was really excited for the performance. Needless to say, I was blown away. Maya’s voice is divine and all of the band members are truly gifted. When Maya sang “Still Searchin” I honestly got chills and guitarist Christian Ver Halen’s strumming out “Hallelujah” was just beautiful. The best part was that all of the energy that the band was putting out, the audience was giving right back. They were clapping and cheering, making up their own lyrics and singing along, and rushing to the stage to give Maya flowers. The show was a huge success; the fact that the band gave two encores says it all. Check out highlights from the performance.

Performances and cultural exchanges like the Rhythm Road Tour are very meaningful to Chinese musicians. Outside of Beijing and Shanghai, there are few venues that support live music (specifically pop, punk, metal, Hip Hop and soul). Going to a performance usually means attending a music festival or a large concert in a giant stadium. Tours by foreign musicians also often hit the big three cities: Beijing, Shanghai and Guangzhou. Consequently, musicians and audiences in second and third-tier cities do not get the same exposure to foreign musicians. So having the opportunity to attend a performance, learn about music production and jam with the band is invaluable. Interaction with other musicians is vital for honing skills, expanding knowledge, and staying motivated. Maya's workshop and performance certainly helped students progress towards these goals. If you doubt the affect of these exchanges, check out the end of the workshop video and look at the huge smile on student Wang Jie Chao’s face as he talks about singing in the cipher. Once he found his groove, there was nothing else, only the music. I think that’s pretty powerful.