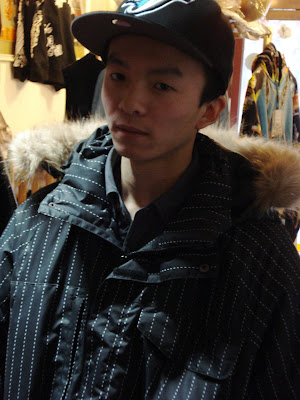 Though Chinese Hip Hoppers listen to Hip Hop from Korea, Japan, Taiwan, Hong Kong, France, and all over the world, many still consider Hip Hop music from the U.S. to be the standard of “real” Hip Hop. The majority of Chinese Hip Hoppers do not speak English and literal meanings of U.S. Hip Hop songs are often lost on listeners. However, they still pick up on ideas, styles, movements, and individual words. In our interview with Beijing rapper Lil’Ray, we were interested in his use of three specific words – ghetto, nigga, and gangsta.

Lil’ Ray (Zhang Rui) a 19 year-old piano student, is quite a character in the Beijing Hip Hop scene. He’s a serious music fan and self-described “digger” (Our interview ended with Ray taking us to an underground music store to check out their vinyl LPs. The store was located through a bookstore, behind a locked door, and around the corner from someone’s pet duck.) He’s a member of the group Bad Blood and has recently gained a bit of fame from his appearance on an episode of “Sexy Beijing”. Before our interview we listened to some of his music including “In Da House” from the King of Beijing Mixtape, “Mighty Bad Blood” from the Section 6 Mixtape, and “Let’s Talk” and “Money in the Bank” from the FAR DVD. We found that Lil’ Ray uses a lot of English in his raps, but there were three English words in particular that we were surprised to hear . . . surprised may be too light of a description. Lil’ Ray used the words “nigga”, “ghetto” and “gangsta” as lightly, it seemed, as he used “yo” and “c’mon.” Each word setting off the, “What did he just say?!” reaction, followed by attempts to translate his verse. To be fair we singled out these words both because of their histories and also because they were spoken in English. We are sure there were similarly shocking or intriguing words that were spoken in Chinese that just passed us by. (Maybe our next post can be about Chinese Hip Hop slang & tag words.) So we decided to ask Lil’ Ray how he was using these words and what they mean in the context of China, especially the word “nigga,” a word that we both think no one should ever use.

As a Black woman with strong opinions on the use of the word “nigga”, I was worried that getting Lil’ Ray to really explain his use of the word “nigga” might get awkward. I didn’t know if it would be worse if he had absolutely no understanding of the history of the word or if he knew exactly what the word means and still chose to use it. Fortunately, the whole exchange turned into a “Who’s on First?”-like comedy skit, which relieved any tension. When I asked the question, “What do you think ‘nigga’ means?” I had to make clear that I was not saying “那个” (pronounced “nei ge”). “那个” is Mandarin for “that” or "which". At first Lil’ Ray heard my question as, “What do you think ‘that’ word means?” To which he obviously responded, "Which word?" And back and forth it went. (Sigh.) So many layers of meaning getting lost in translation.

The moment made me remember the first time my Mom came to visit me in Beijing and she asked, “Angela, what is all of this nigga, nigga stuff about? I think people have been listening to too much Jay-Z in China.” Very true, Mom. (This joke would later be retold by Russell Peters.) Chinese Hip Hoppers are adding frequently used words, phrases and themes from Hip Hop from the United States to their active vocabularies.

To Lil’ Ray’s credit, after we turned off the camera he asked for the definition and history of each word. He also asked if I would be offended if someone called me a “nigga” and I told him that I would and gave him my reasons why. He then asked why so many Black Americans use the phrase if it has such a negative history. I tried to explain the difference between using the word as a pejorative, racist term and a term of endearment. I also explained that not all Black people see the issue the same, though he probably should not go around calling Black people “my nigga” and should stick with “哥们儿”.

Over the past couple of weeks we have been questioning the importance of content and form to defining “Hip Hop”. What makes a Hip Hop song “Hip Hop” – the beat, the melody, the structure, or the lyrical delivery? How much can you innovate Hip Hop before it is no longer recognizable as Hip Hop? Can we continuously expand the definition of Hip Hop without rendering it meaningless? Or, is content more critical than form? Is it the ideas and the emotions expressed through a song that make music Hip Hop? If so, what happens when content is lost in translation?

Newer Post Older Post Home
Dongting (2007-2008) was a research blog on Hip Hop in China. It was a space to share the music and the stories of the Hip Hop artists we encountered, the questions we explored, and the ideas we developed. Dongting is not a chronological history nor is it a comprehensive profile of Hip Hop in China. Rather, it was our personal record of what we found interesting to listen to and pleasing to the ear.