“One of the major obstacles to the growth of Chinese Hip Hop right now is too much beef, too much criticism and disrespect between people from different cities and even groups within cities.”
- African-American Hip Hop producer V, Xi’An

“I’m happy to see Hip Hop growing but I miss the early days when everyone would hang out together, rappers, Bboys, writers. There were only a few of us then but we were really close. Now the scene is so scattered.”
- Rapper and Visual Artists Song Wei, Kunming

“In Shantou all of the Hip Hoppers have good relationships. The rappers, writers, dancers, we’re all good friends.”
- Rapper Big Snake, Shantou 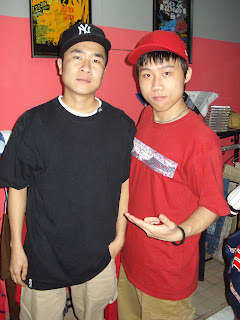 Part of Hip Hop’s power is its ability to build communities, to bring people together for a few hours or for a lifetime to appreciate and create art, music and dance. However, this potential to build also has the potential to break down. A culture as creative, ambitious and competitive as Hip Hop will also produce divisiveness. There are many ways to evaluate Hip Hop communities in China and we have often chosen to compare the dynamics of different cities. In large cities, like Shanghai and Beijing, the Hip Hop communities are the most vibrant and the most at odds. Artists clash over personal and artistic differences and form alliances in opposition to ohttp://www.blogger.com/img/gl.link.gifther groups. In medium-sized cities with growing Hip Hop communities, like Kunming and Xi’An, close-knit groups are beginning to splinter as they compete with one another and struggle to maintain. However, in small cities like Shantou, the Hip Hop community remains cohesive and supportive. The idea remains that Hip Hop artists from all of the elements can work together and improve the collective lot. Shantou artists can hold onto this, perhaps idealistic, vision because their numbers are still very small. However, this sentiment is also underscored by the strong friendships between Shantou rappers, dancers, DJs and artists. Meet some of Shantou's Hip Hop artists. Only time will tell how the growth of Hip Hop in Shantou will affect the character of the community, but I believe that the cooperative spirit alive today is something all Hip Hop artists can learn from.