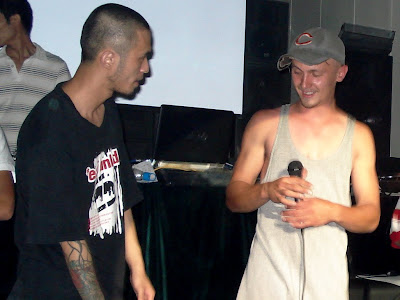 In introducing the Kunming based rappers Hu Xuan a.k.a MC Tang Ren Ti and Mike Medcalf a.k.a Mike Wind or The Medic, I think taking a look at their group’s name, or names, is a good start. They go by two names. In Chinese, they call themselves 邪作社, or “Xie Zuo She.” In English, they are Co Op Sol. In both languages the names highlight the idea of cooperation. Hu Xuan is from Kunming and Mike is from Cincinnati and the two have come together to create music that highlights their unique approach to rapping in different languages and also manages to showcase their stylistic similarities. The fact that all of their music is produced by Hu Xuan only adds to their originality.

Co Op Sol is at the forefront of Kunming’s Hip Hop scene, and with recent performances in both Guangzhou and Beijing, they are gaining popularity on a national scale. The fact that they are a multinational, multilingual group touches upon the somewhat complex questions about who is considered a “Chinese” Hip Hop artist, and also the importance of which languages are used in making Chinese Hip Hop. Through their unique personal voices, both Hu Xuan and Mike use their lyrics to touch upon some of these issues, as well as a variety of other interests and topics that run the gamut from the alien network, to Sacagawea, to both of them being kind of skinny. Take a closer look at 邪作社/Co Op Sol.

Tang Ren Ti is a fuckin genius when it comes to beats and flows like a river. Unique.

You guys are doin great with your research on Chinese Hip-Hop culture, hang tight.