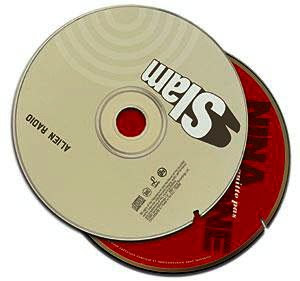 The word dakou (打口) will be mentioned several times in the upcoming video on the Shantou Hip Hop community. Shantou rapper Big Snake even claims that Shantou was home to China’s first dakou record store. Shantou does, in fact, have a reputation for being the best city for purchasing dakou albums. But what is a dakou record and what is its importance to the independent music scene in China?

During the 1990s, dakou records were the primary way in which Chinese youth learned about new music. One Chinese blogger claims that every Chinese person in pursuit of musical freedom listened to dakou records. Dakou records were surplus albums, produced mostly in the United States, that were supposed to be destroyed. The majority were burned or otherwise destroyed with chemicals. However, some were simply damaged by punching a hole in the corner of the CD. This prevented the entire album from being played and usually the last few songs were lost. The term dakou or “打口” means to make a hole. These CDs were transported to China, sometimes first passing through Japan or HK, and sold in dakou CD stores and black markets. (The question of whether or not selling dakou CDs is illegal is up for debate since the albums are garbage plastics and artists and companies would not have received revenues anyway.) From classical to Rock & Roll to folk to Hip Hop, dakou albums encompassed all genres of music and introduced Chinese listeners to new musical possibilities.

The first Chinese musicians to claim the word dakou were Rock & Roll artists in Beijing who were part of the Beijing New Sound Movement in the late 1980s. They used the term "dakou generation" to define the generation of musicians born between 1970 and 1985. The term "dakou youth" would later be used to characterize a type of lifestyle assumed by idle and disaffected urban youth also labeled “urban fringe”.

The sale of dakou albums in cities through China still abounds, though most CDs are no longer damaged. Besides the previously mentioned uses of the term, today dakou basically just means surplus CDs that are reintroduced to the Chinese market. You can even purchase dakou albums in bulk on websites like www.dakoumusic.com. While the Internet has supplanted dakou CDs as the most important means of accessing new music, dakou albums continue to influence Chinese youth in pursuit of musical freedom.

Click here for more information on the dakou generation and dakou records and Beijing Rock & Roll.