A closer look at Dumdue 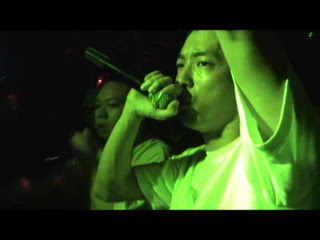 Kidgod and Along of Guangzhou's Dumdue
We’ve mentioned Dumdue before in past posts, we’ve featured their music in our Song’s of the week section, and we’ve used a number of their quotes in our short videos. So while this short video might not be the “first look” you’ve gotten at the Guangzhou based rap group, it’s a chance to get a “closer look.”

Dumdue, made up of A-Long (rapper/producer), Kidgod (rapper), and Edi (DJ), has been making music together since 2003. They make all of their own beats and rap exclusively in Cantonese. Dumdue has also started their own music collective called Chee Productions, which includes a few other local Guangzhou Hip Hop artists, such as DJ Fatkit, DJ DJam and Hip Hop dancer, Ji An. Click here to go to Dumdue’s Myspace page.

With one of the most unique sounds in Chinese Hip Hop today, Dumdue commands considerable recognition and respect within the underground Hip Hop community. They are often featured in local Guangzhou Art and Style magazines as well as national Chinese Hip Hop websites like hiphop.cn. However without the support of being signed to a major record label Dumdue remains virtually unknown to the majority of Chinese youth.

Which is a shame, because they are really good.