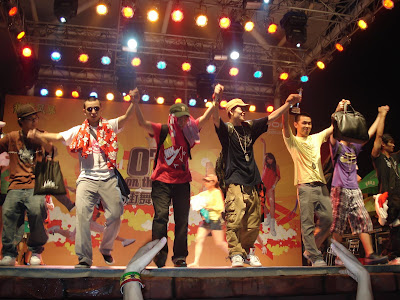 This past weekend we attended the three-day On The Stage (OTS) Hip Hop dance Competition at Dino Beach in Shanghai. OTS was organized by Stanly Wong, the founder and director of Shanghai’s Dragon Dance Studio. Stanly has been dancing for almost twenty years and has been very influential not only in the development of Hip Hop dance, but in the development of Chinese Hip Hop culture in general. To quote Shanghai rapper Tang King of Red Star: “Stanly, he is REAL Hip Hop.” And with students traveling all the way from Xinjiang to study with him (such as Purcat, the leader of Urumqi’s DSP Crew and Ha Shan, the leader of Karamai’s Dancekid Crew), praise for Stanly can still be heard far away from Shanghai.

The individual battles were divided into four categories, New Style, Funk Style, Girl’s Freestyle and Breaking, with each winner receiving a prize of 10,000 RMB (approx. $1,500 USD).

In addition to bringing out Chinese Hip Hop dancers from all over the country, the OTS Competition was judged by a panel of premier International Hip Hop artists, including Ken Swift of the USA’s Rock Steady Crew, break-dancers O-Hashi and ISOPP of Japan, and New Style dancers Meech and Clara of France.

Check out the highlights from the 2008 OTS Hip Hop Dance Competition by clicking the links above.