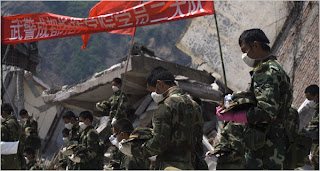 On the morning of the 13th I woke up to an ominous message on a friend’s instant messenger. It simply said “Bless Angela and her friend”. Although my friend is a sweet person, I didn’t understand her sudden concern. I didn’t even have time to drop her a line before I received several text messages and emails asking if I was all right and if I had been affected by the earthquake. I was still in Kunming and hadn’t even heard about it. But by the end of the day, reports from domestic and international media agencies were already streaming in about the level of devastation and relief efforts already underway. The shock, sadness and sympathy felt by all after the earthquake, has turned many to action. People throughout China and the world have supported government relief efforts through donations and volunteering. Members of the Hip Hop community have also responded by organizing and participating in benefit concerts and donating proceeds from performances. If you would also like to help, the New York Times has compiled a list of organizations that are currently engaged in relief efforts.

As the nation continues to deal with this tragedy, every day there are more stories of suffering and loss, but also stories of hope. My heart goes out to everyone affected by the earthquake - survivors, families, relief personnel and volunteers. Bless them.

I hope you're both safe from the horrendous earthquake damage.

I just stumbled on your blog trying to keep updated with the hip-hop scene out in China... i met you very briefly in Shanghai in 2005 when i was on a Watson Fellowship researching Hip-hop in Asia, but we didn't get to talk. Good to see you're still out there, on a Fulbright no less!