DòngTīng Song of the Week 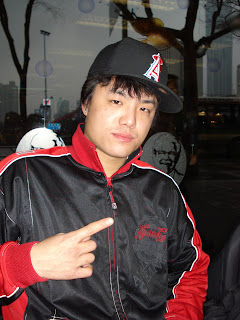 
This week’s song comes from MC Jiverson, a member of Shanghai’s To Be Continued (TBC) Crew. Jiverson has a reputation as a comical, over-the-top battle rapper. Though his freestyle rhymes are wild and loose, his written rhymes are far more polished and introspective. “Homie” is his celebration of two positive themes in Hip Hop – friendship and brotherhood.

Newer Post Older Post Home
Dongting (2007-2008) was a research blog on Hip Hop in China. It was a space to share the music and the stories of the Hip Hop artists we encountered, the questions we explored, and the ideas we developed. Dongting is not a chronological history nor is it a comprehensive profile of Hip Hop in China. Rather, it was our personal record of what we found interesting to listen to and pleasing to the ear.